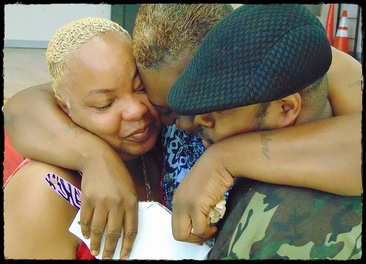 Lom Nava Love is the unflinching story of Black families in inner city Baltimore harnessing their strengths to challenge the systems and institutions that would dictate their realities.

Under attack since slavery, the Black family once had to fear it might be torn apart for a bill of sale, and today watches as a system of mass incarceration perfects its own method for removing Black men from their homes, often to see them coerced into involuntary labor for the state. Throughout this difficult history of forced fragmentation through policy, Black women have anchored families and entire communities, fostering protective factors for the children they nurtured and expanding the vision of family well beyond the narrow traditional definition, born, as it was, of relative privilege and material comfort.  But just as an anchor is pushed out of view and left to do its work beyond sight’s reach, Black women have all too often had their invaluable contributions go unacknowledged, despite the essential role those contributions played in every struggle Black people have engaged in on American soil.

Lom Nava Love offers something of a corrective to this problematic erasure.  Centered on the work of community organizer Shirley Foulks and directed by Youth Resiliency Institute co-founder Fanon Hill, Lom Nava Love documents Foulks’ engagement with families and how she uses art to communicate the abilities, strengths, and power to effect change that Black families innately possess. 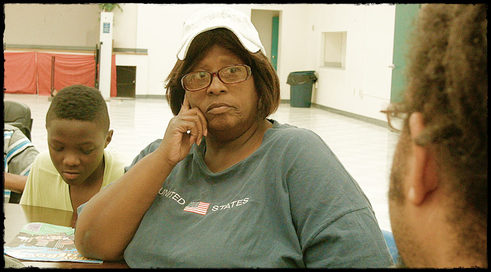 Affectionately known as Mama Shirley, Foulks has spent decades organizing families living in public housing in Cherry Hill, one of the most segregated and disinvested communities of Baltimore, where 69 percent of households make below the U.S. average, and the median income is $15,690,[1] below the current national poverty threshold for a household of two.[2]  While traditional programming designed to help poor families has tended to be oriented exclusively towards children, Foulks has understood the centrality of the entire family not only in the success of children, but in the success of community oriented programming as well.  Using art to involve the entire family, as well as to connect different families to one another, Foulks is able to draw upon the collective strengths of everyone involved as they work to guide their youth through the challenging maze of poverty, and as they organize to challenge the institutional structures that limit their horizons.  This approach fosters not only early childhood development, but economic security, while also providing culturally relevant youth development and family leadership opportunities.
Lom Nava Love tells the story of just a few of the families Foulks has worked with through the Journey Project, detailing how those families have been transformed.  Foulks’ impact goes well beyond simply helping families understand their strengths, she is able to help them understand their responsibility and sets them on a self-determined path toward becoming true individuals who are contributing not just to their communities, but outside their communities collectively as organizers.
The Journey Project, which has been supporting Foulks’ work and collecting footage for the documentary since 2010, is a Youth Resiliency Institute initiative that engages the families of low-income Black children through cross-generational art-making workshops in order to facilitate those families’ participation in their children’s educations.  The Institute terms this style of working with low-income Black families “emancipatory family engagement,” a practice which, among other things, seeks to expand the rim of freedom for low-income Black families through exercises modeled on African-centered rites of passage.  Operating in East Cleveland, Ohio and Baltimore, MD, the Youth Resiliency Institute not only works with families in both cities, but connects those families across state lines, that they might combine their strengths as they strive to push themselves, and their children, beyond the horizons delineated by institutional and social structures.

In 2014, after years of working in Cherry Hill without outside financial assistance, the Youth Resiliency Institute received a family engagement grant from the W.K. Kellogg Foundation to support this important project, funds which also contributed to the making of Lom Nava Love.  Over 1,130 applications were received by the W.K. Kellogg Foundation for this grant, the most ever in its 83 year history for a single funding opportunity, a level of demand that is a clear indication of both the need, and the opportunity, to invest in efforts that would result in increased family engagement in a child’s academic life. 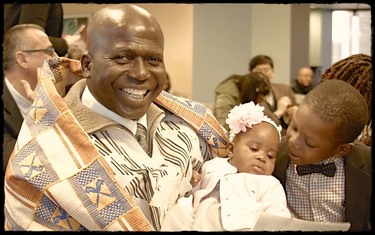 The documentary’s title, Lom Nava Love, comes from the Ewe language spoken in West Africa, and communicates the understanding that if you love me then you will come to me.  At the core of Foulks’ approach to organizing lies the conviction that Black families are their own best answers to the challenges they face in their communities.  Art is not here a means of improving families, but a way to remind those families of the power they innately possess and which can be harnessed to effect a new vision for communities.  It is an approach to organizing that comes to families, rather than attempt to fix them.

Lom Nava Love premiered October 15, 2016, accompanied by an original soundtrack written, composed and produced by Fanon Hill, and featuring vocalist Navasha Daya, as well as special guests Abu The Flutemaker, Kelly Bell, Kush Abaday, Jonathan Gilmore, and Rashad “Hurricane The King” Hawkins, among others.
Throughout a long and difficult history the Black family has endured.  The Black community has endured.  Foulks has distilled a means of drawing out the strengths that have made that feat possible, reminding Black families of the resources they already possess, ones that cannot be stolen away by segregation, poverty, or institutional structures.  These are resources all Black families can find stored away within themselves if they are willing to venture there.  Lom Nava Love.